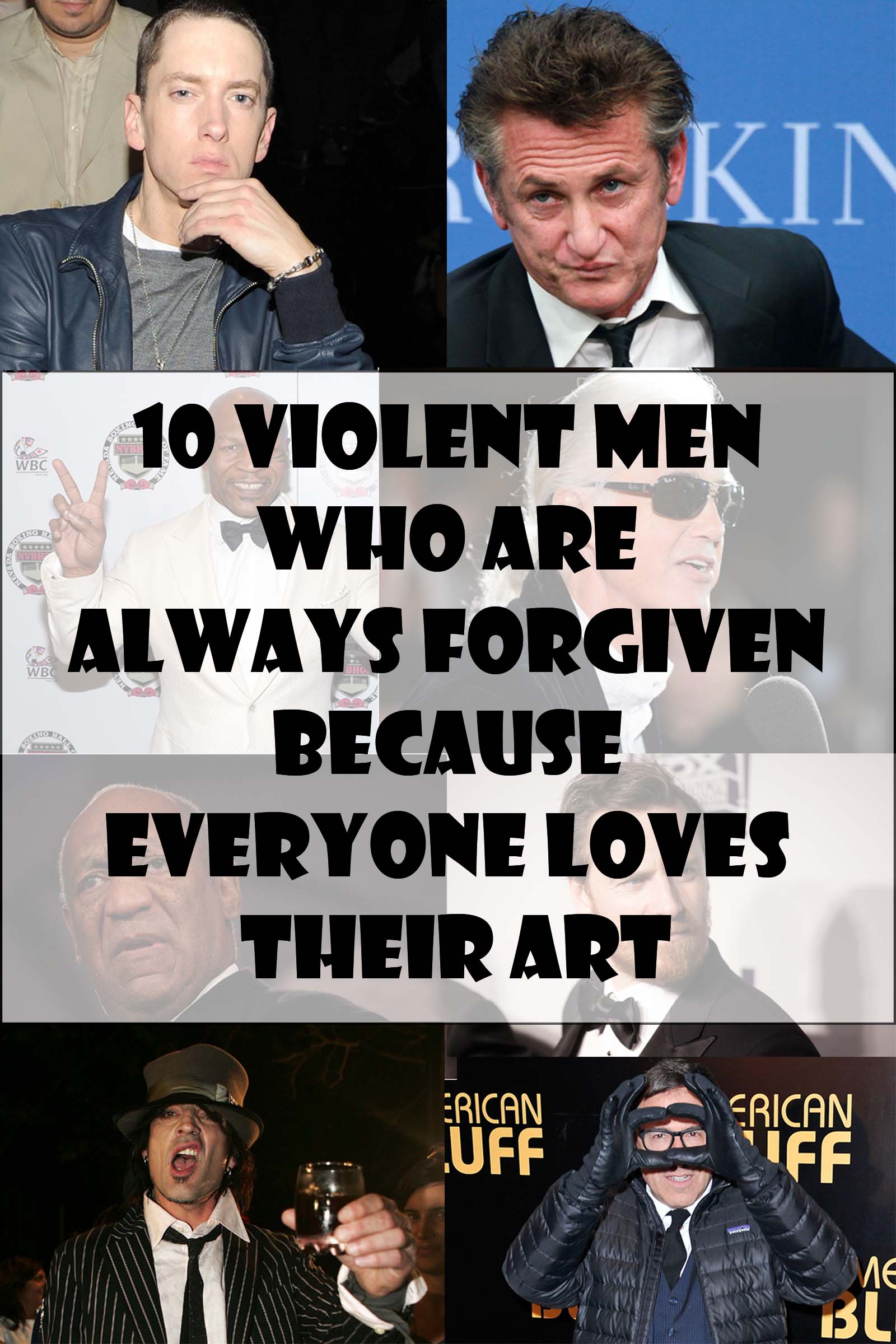 In light of the recent developments concerning Woody Allen‘s alleged abuse of daughter Dylan Farrow at age seven, there’s been a rush of impassioned defenses of Allen. While this whole debacle gets hashed out in the court of public opinion, there’s been some interesting, albeit not new, conversations about bad people making good art. And finally, it’s brought up information about celebrities we’ve long forgotten in service of protecting their artistic reputations.

Allen isn’t alone. Plenty of celebrities have been involved in instances of repeated domestic abuse, violence, or rape, and we ignore it because of the disconnect between their public personas and private issues. We have a system in place for burying these stories in a surprisingly short time, and as such, we think of these people are great artists who also raped/beat up some people. 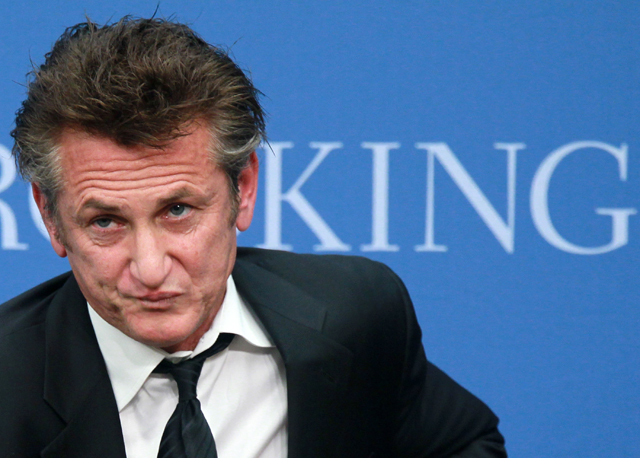 Penn is a violent guy who spent 33 days in jail in 1987 for assaulting a photographer, and was arrested and charged with felony domestic assault after beating then-wife Madonna. Now, Penn is thought of as the leading guard of Hollywood liberals; he was an outspoken critic of George W. Bush and the Iraq war. He’s also painted himself as a great humanitarian–the first thing I picture when I think of Penn nowadays is him triumphantly on a raft in Haiti. With Penn, we haven’t necessarily forgotten his violent past, but it’s been rewritten and romanticized. Penn’s former violent streak has been morphed into a bad boy persona turned good, and it’s easy to ignore the past when the new narrative is so attractive. 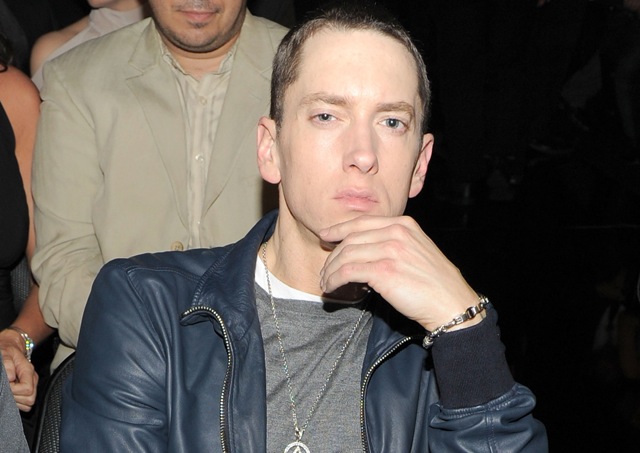 When Rihanna and Eminem’s duet “Love The Way You Lie” debuted in 2010, it brought up old stories about Eminem’s past issues with domestic violence. In talking about the song, Rihanna said that domestic violence is something that she and Eminem both experienced, “you know, on different sides, different ends of the table.” She’s referring of course to her experience as being the victim of Chris Brown‘s brutal attack, and to Eminem as the attacker of his ex-wife, Kim.

Eminem’s “Kim” gleefully recounts his violent feelings about Kim (who has accused him of horrific assaults) and details his desire to brutally murder her. In 2013, Eminem was awarded a Global Icon Award at the MTV EMAs. Everyone loves a redemption story, and I guess continuing to rap about how you beat up your partner counts. 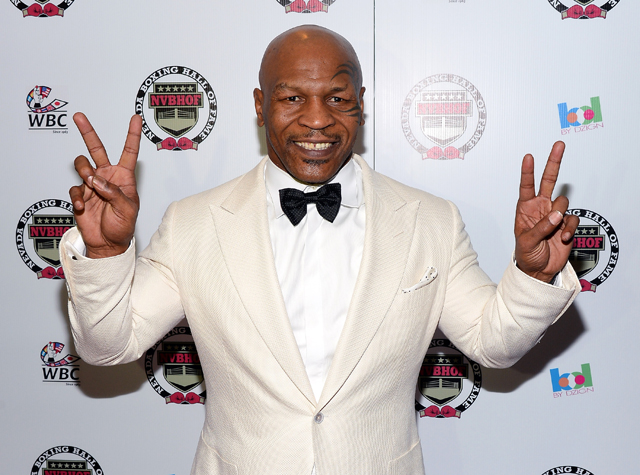 Nowadays, Mike Tyson is a hilarious 80s throwback legend who has funny cameos in movies like The Hangover, with Bradley Cooper excitedly praising Tyson’s comedic abilities (this, I suppose, counts as art). Tyson is also a convicted rapist who served three years of a six year sentence for raping an 18-year-old woman in 1991.

In addition, Tyson was allegedly violent with his first wife, actress Robin Givens, although he clarified that he never hit her with a “closed fist,” because apparently all other hitting was fair game. He later clarified by saying “I grabbed my wife and hold my wife, you know what I mean? I shake my wife up. I never totally struck my wife.” Great.

But you know that part where he sings “In The Air Tonight?” Pure gold. 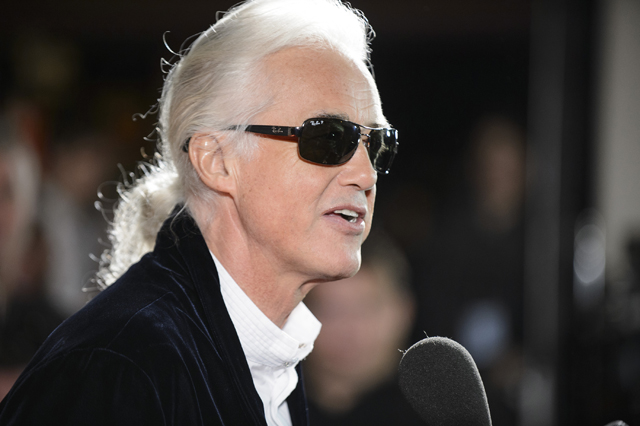 If you went through a Led Zeppelin phase in high school, you might not have known that Jimmy Page dispatched a roadie to kidnap a 14-year-old. Richard Cole walked up to Lori Maddox and apparently said “Jimmy told me that he’s going to have you whether you like it or not. You fucking move and I’ll fucking have your head,” which he followed by grabbing her and forcibly putting her into their limo. Page carried on their illegal, sexual relationship for three years. Another term for that sexual relationship is “statutory rape.”

This has largely been forgotten or thought of as characteristic of the time, since it was all pretty anything goes back then. Unfortunately, statutory rape isn’t something that should be chalked up to the time, swept under the rug, or go unpunished.

Bill Cosby was accused by multiple women (upwards of 13) of sexual assault. As detailed in Tom Scocca’s piece for Gawker, many of the allegation included drugging. Four women came forward to give accounts of the assaults under their real names, which is both brave and rare, and multiple lawsuits were settled with gag orders on the victims. All of this information was available to the public in a 2006 People Magazine article, and yet, nobody remembers this, myself included. As Scocca put it, “[w]ith shocking speed, it was effectively forgotten.” He also points out that these lawsuits had little to no effect on his public perception or career:

In 2009, Cosby was awarded the Mark Twain Prize for his distinguished achievements in humor. In 2010, he was honored with the Marian Anderson Award, for “critically acclaimed artists who have impacted society in a positive way, either through their work or their support for an important cause.” 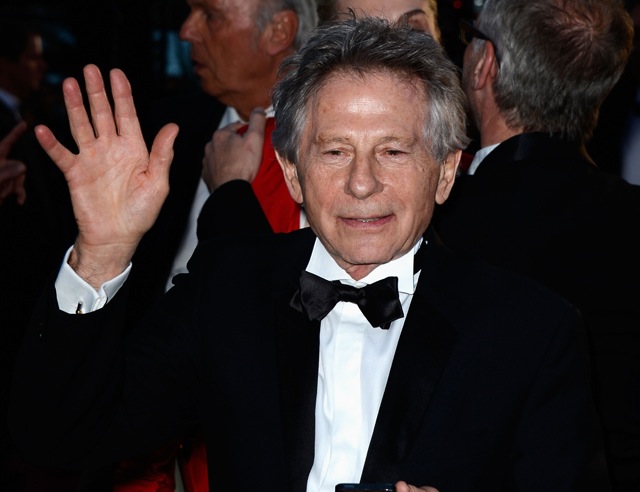 Roman Polanski was arrested and charged with raping 13-year-old Samantha Gailey (whose name I use because she’s spoken publicly and written a memoir about the rape). Polanski had invited her over under the pretense of photographing her, and then gave her alcohol and Quaaludes before raping her. After his conviction, Polanski fled to France and has avoided extradition.

In September of 2009, Polanski was detained at the Zurich Airport due to his 1978 U.S. Arrest Warrant. While Polanski was in custody, over 100 people in the film industry publicly called for his release in a petition, including Woody Allen, because making notable artistic contributions outweighs raping a 13-year-old. In July of 2010, Switzerland rejected the U.S. request and Polanski was released from custody. 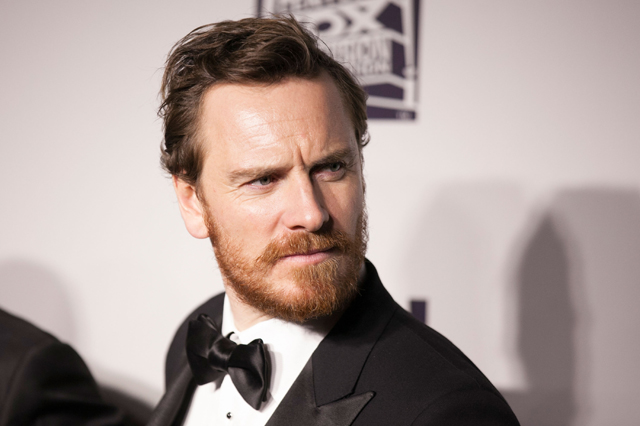 Michael Fassbender is known for being a truly excellent actor whose gritty performances elicit visceral reaction in viewers, but he also beat his ex-girlfriend, which elicits a different type of visceral response. The Frisky reports on the details of the attack:

His ex claimed he threw her over a chair, broke her nose, dragged her alongside her car, and caused her to twist her left ankle and blow out her left kneecap. In addition to a restraining order, she asked for $20,000 to cover medical expenses for her injuries.

Eventually, the woman in question dropped the charges for any number of reasons, including the possibility of being intimidated, not wanting to sabotage Fassbender’s career, or being paid off. 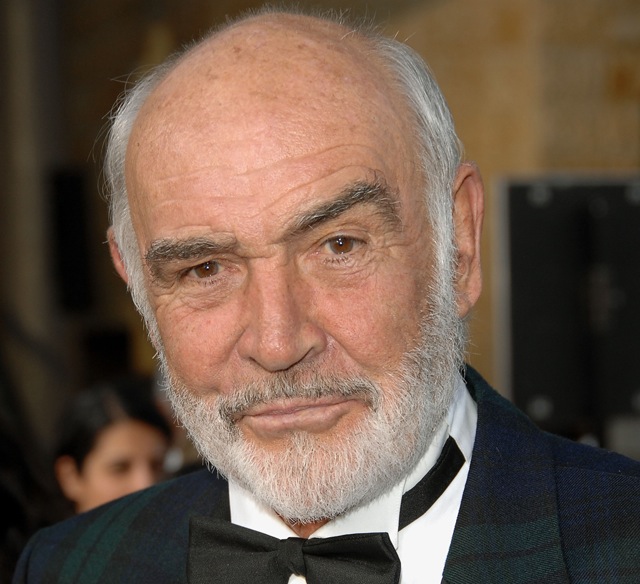 Sean Connery has publicly admitted to beating women, and doesn’t see anything wrong with it. In this case, I think his words say a lot more than I ever could. He was quoted in a 1965 Playboy saying:

“I don’t think there is anything particularly wrong about hitting a woman – although I don’t recommend doing it in the same way that you’d hit a man. An openhanded slap is justified – if all other alternatives fail and there has been plenty of warning. If a woman is a bitch, or hysterical, or bloody-minded continually, then I’d do it. I think a man has to be slightly advanced, ahead of the woman. I really do – by virtue of the way a man is built, if nothing else. But I wouldn’t call myself sadistic.”

“I haven’t changed my opinion. […] No. Not at all. I don’t think it’s bad, and I think it depends entirely on the circumstances, and if it merits it. If you have tried everything else – and women are pretty good at this – when they can’t leave it alone and want to have the last word, then you give them the last word. But they’re not happy with having the last word, they want to say it again and get into a really provocative situation. Then, I think it’s absolutely right.” 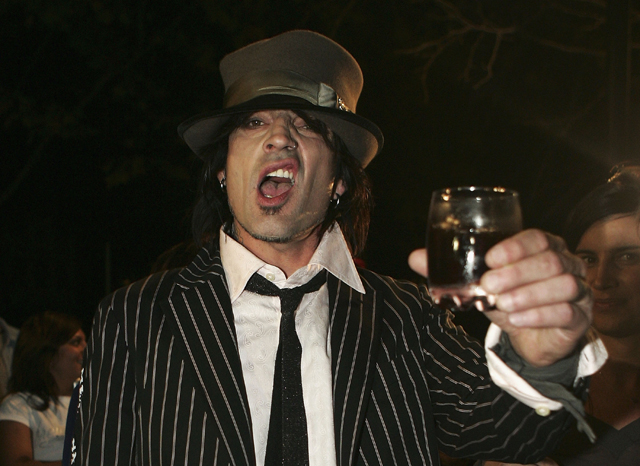 After beating wife Pamela Anderson and leaving her badly bruised, Tommy Lee was sentenced to 180 days in jail for felony spousal abuse in 1998. At the time of the beating, Anderson was holding their infant son. This wasn’t a one time offense–”Lee had been repeatedly placed on probation for a series of violent incidents dating back to 1983.” The judge in the case “faulted the justice system for allowing the rocker to believe that he could get away with behaving violently.” This is an excellent point, because it’s certainly not just public opinion that lets celebrities off the hook. The justice system is just as culpable, although serving time doesn’t necessarily do much to lower people’s opinions of celebrities (see: Mike Tyson). 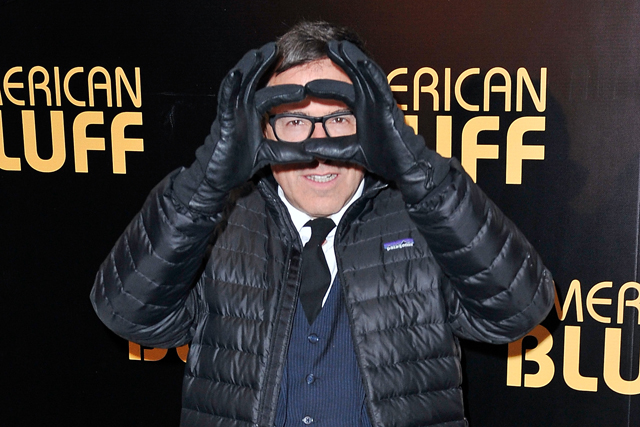 Russell is known for his violent temper and erratic behavior–anyone remember the Lily Tomlin incident while filming I Heart Huckabees? But things really took a turn for the worse in 2013, when Russell admitted to groping his 19-year-old niece (who for some reason is always referred to as “transgender niece,” when “niece” would suffice), although faced no charges. This all happened at a gym, where Russell helped his niece work out and then for some reason felt her breasts after enquiring about breast augmentation. Russell says that he did this because he was simply curious about the procedure, and also that his niece flirted. As nieces do.

This is by no means a complete list, because the number of violent people glorified by Hollywood would fill an entire website, but these are the people I forget about and have been so wholly forgiven that it amazes me what we’re capable of repressing.

I think by this point, we’re past the conversation of the ability of bad people to make great art. Of course they can. Charles Dickens was a wife-beating asshole. J.D. Salinger liked them young. Pablo Picasso was a sociopath who tormented the women in his life. Bad people make great art all the time. It’s up to individuals to reconcile that difference, because if we start saying that every bad person’s art should be disregarded, we would unfortunately be left with very little to look at.

Of course, good art does nothing to exonerate horrific behavior, and some people’s behavior is so atrocious that it’s hard to separate their work from their actions (plenty of people on this list fit that criteria). Perhaps the issue here is one of priorities–to appreciate their creations but always in the context of who they are. Maybe we should start thinking of these guys as rapists/abusers who make art, instead of the other way around.