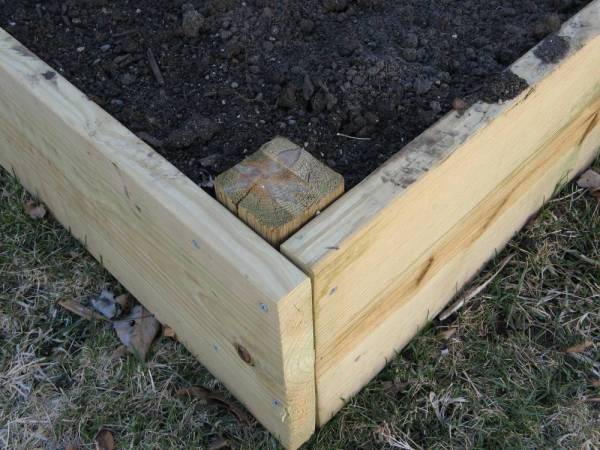 I am a man of science. I don’t believe in anecdotes, and having an analytical mind and having been exposed to rigorous scientific study in college when I was a research assistant in a lab, as well as of course the academic work in college, I’ve always looked at things scientifically, and today I’m going to look at pressure treated lumber.

Many people and sites and magazines will say you shouldn’t use pressure treated lumber, it is bad and will leach dangerous chemicals like arsenic into the soil and it’ll get in your plants and give you cancer.

I’m sure we all know the story of fish and mercury right? Mercury gets in the water and the fish drink the water, and since mercury and other heavy metals do not get metabolized, they can permanently build up in fish flesh (this is like lead poisoning in humans). Then predatory fish eat the little fish and they get even more mercury build up. Then humans eat the predatory fish and we get mercury poisoning.

There are a lot of assumptions, and just one break in the chain breaks the risk.

CCA lumber contains chromium, copper, and arsenic. Chromium isn’t that toxic and only if we inhale it. Copper isn’t toxic to mammals, and in fact it is used in some skin creams and whatnot. Arsenic is the bad one, a known carcinogen, something to be avoided. Did you know the Romans used to use it as makeup? But people didn’t live long back then anyways.

The truth is arsenic is everywhere, it naturally occurs in soil and water and we eat small amounts of it everyday. The type in CCA wood (inorganic arsenic) is more toxic than the natural types, but just for reference, it is already in the food you grow.

According to this article, which is an excellent source. Studies have been done showing most leaching only occurs during the first rainy season, and that it doesn’t leach more than a few inches from the wood. Then, most plants do not take it up from the soil, the ones that do in only small amounts, and the arsenic is stored in the parts we do not eat. For instance carrots grown in a control bed had 0.05 parts per million arsenic, those in a bed with CCA lumber had 0.11 parts per million, a doubling, but still a very small amount, and carrots were one of the worst (root vegetables in general were the worst since that is where the plants store arsenic).

So, is CCA lumber safe? Well, you can leave it out for one year letting the initial leaching get over. Then you can build your beds and line it with plastic sheeting or roofing fabric or some other membrane to stop leaching, and you can not plant root vegetables in it or near the sides of it where the leaching take place.

All told, by looking at the science, I do not think anyone needs to worry about growing vegetables in CCA lumber beds. Sure, you could use cedar, and pay 8x the price (if you can even find cedar in a 2×10 or 2×12 which is my preferred size), but CCA would be fine.

So, for those worrying about it, don’t. Save yourself a few hundred dollars and get pressure treated lumber for your raised bed or other garden projects. It is cheaper than cedar, and worry free. Even if it still contained arsenic it’d be pretty safe, but it doesn’t even have that small risk anymore.