I want to share a couple recent purchases I made for my garden, specifically, for a water feature I am building that I should be able to share in a week or 10 days.

The first is this gorgeous rock called Three Rivers Stone. I was at the stone place and wanted some boulders 12-18 inches square and wanted something interesting. I was just going to get generic glacial boulders which are cheap, but then I saw these, and I fell in love. They’re just so cool. Apparently they’re from a place in Idaho and it is the only place in the world you get these stones (a type of very very very dense & heavy sandstone). I’m guessing it is near three rivers or what used to be three rivers. There are shades of true purple, gold, yellow, rust brown, and even streaks of black (oil? Dunno, I’m no geologist) in some. They have so much visual strength and character. I bought about 2500 pounds worth and paid $500, including delivery, which is cheaper than I thought it’d be. That volume gains me around 20 (or just under) linear feet of wall for my raised water garden. 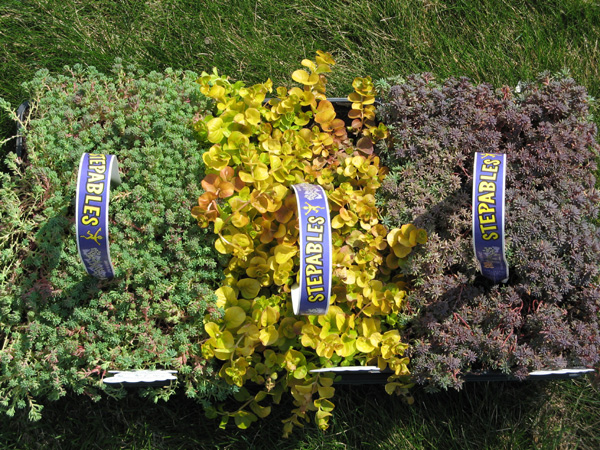 The second thing I bought were some “Stepables” ground covers. These were expensive, $45 a tray, but what can you do? “Stepables” is just a brand name for a company that sells ground covers that take foot traffic. I bought a tray that is 1/3rd blue sedum, 1/3rd golden moneywort (lysimachia aurea), and 1/3rd purple sedum. I know for a fact that all three plants are stupidly easily to propagate and had I had the option to buy them anywhere else, I would have, but I’d never even seen those types of sedum before, and I check out a lot of catalogs, ebay, and nursery websites. So, I bought them for the high price, but if you were to do the same I would recommend you do as I did and buy the minimum and then propagate them by yourself, they’re so easy.

I actually had a golden moneywort already (and had propagated it all over my yard), but I had bought it on ebay and I didn’t know what cultivar, if any, it was, and this stuff in the tray is more golden than mine, which is why I bought it originally (nice golden ground cover is good for contrasting foliage colors). So I figured I’d give this stuff a try and see how it compares to what I already had.

The sedum though, that stuff is for my water garden. Won’t that “Purple Form” sedum look great cascading down those three rivers stone boulders? I can’t wait.

To propagate either sedum or lysimachia get a tray like what you buy annuals in, recycle the ones you get from the nursery, fill it with soil. Then make a bunch of random small 3 inch or so cuttings from the plant you want to propagate, dip each in rooting hormone, stick it in the soil, keep it moist, and give it a few weeks. So easy. I’m propagating sedums constantly in the summer.

I’ll also be putting baby dwarf evergreens around the water garden, it is going to look great, stay tuned for pictures when it is done.